Bon Iver‘s blink-and-you’ll-miss-it spring 2019 tour passed through Cincinnati on March 31st and the show provided the perfect opportunity to bid bon voyage to a hard winter. Despite occupying space in my record collection for over a decade, this was the first time that I’ve actually seen Justin Vernon and company in concert.

Well … that’s not entirely true. I’ve watched and rewatched the band’s 2012 Austin City Limits performance countless times. Following the 2011 release of Bon Iver’s self-titled second LP, the ACL appearance seemed to catch the touring band at the height of their powers. It’s a great set and remains one of my favorite ACL performances.

The version of Bon Iver that we just got at the Taft Theatre is a leaner, louder ensemble: a quintet featuring two percussionists and a heavier reliance on synthesizers, which is more-or-less in line with the glitchy aesthetics of 22, A Million. Even in this trimmed-down formation, Bon Iver’s sound remained large. 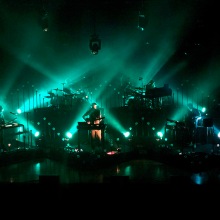 Billed as “An Evening with Bon Iver,” the concert had no opening act and was divided into two distinct sets (not unlike a typical Grateful Dead performance, a band referenced at least once by Vernon during the evening). A digitally-manipulated voice helpfully announced the beginning of each set over the Taft Theatre’s PA.

I’m sure the lack of opener was due in large part to Bon Iver’s elaborate stage setup, which saw each member of the band framed by tiered columns of lights. The production values were as high as anything else I’ve seen at the Taft, and that includes a staggering performance by Sigur Rós that I attended back in 2006.

Of course, the end of March also means that I’m now three full months into 2019 and still committed to #nodaysoff … although I’ve been faithful to my taper now that my race is less than one week away. I’ve decreased my mileage and the intensity of my cross training and strength training, all while putting more of an emphasis on recovery and general race preparation. Ready or not, the Forget the PR Mohican 50k will be here on April 6. All the more reason to enjoy a night out before I tackle my first ultra!