Last May, my wife and I spent a few days camping at Mammoth Cave National Park before heading to Nashville to catch Fleet Foxes in concert at the Ryman. During one of our caving tours, a park ranger told us about another (somewhat) nearby cave in Tennessee that served as a music venue. One year later and we finally had a chance to check out that unlikely concert space – formally known as The Caverns – for a taping of the PBS program Bluegrass Underground featuring one of my absolute favorites: Gregory Alan Isakov.

The Caverns venue is nestled in the valley of Pelham, which is located northwest of Chattanooga. We stayed in the nearby town of Monteagle and were delighted to discover a “rails to trails” recreational path located mere feet from our motel. Known as the Mountain Goat Trail, the path runs alongside country roads and winds through forests en route to the neighboring town of Sewanee. As a very frequent visitor to Tennessee, I wasn’t expecting to find such a pedestrian-friendly feature adjacent to our motel, nor was I expecting to find vegetarian-friendly eateries along the path! On our five-mile-long morning run along the trail, we discovered Mooney’s Market and Emporium, which carries fresh produce, locally-sourced kombucha and other sundries. We picked up some kefir and kvass from Short Mountain Cultures and then grabbed lunch at the Crescent Cafe Juice Bar, a small camper situated just behind Mooney’s that serves up vegan wraps and a great cup of coffee, amongst other things. God knows how many times I’ve had to live off of nothing but slices of cheese pizza and Sub-Way “Veggie Delite” subs when traveling through the south, so Mooney’s and Crescent Cafe were a real treat! 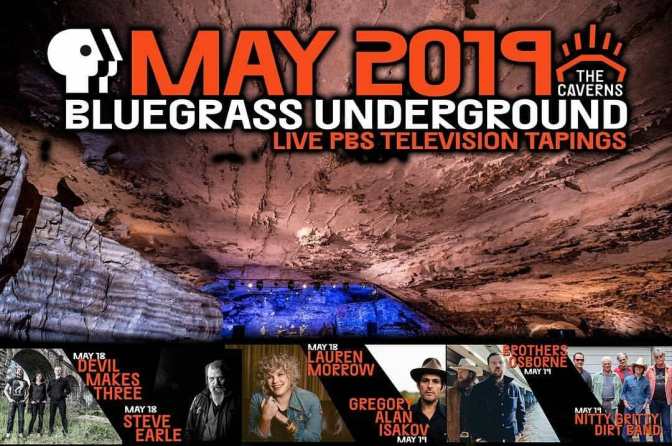 Operating with the tagline “A little bit Bluegrass, a little bit Underground,” Bluegrass Underground is a televised showcase of bluegrass, jam band, roots, folk and Americana concerts. The PBS program has featured acts like Andrew Bird, Jason Isbell, and Old Crow Medicine Show for nearly a decade, so Gregory Alan Isakov was a perfect fit for the show’s upcoming ninth season. The May 19th taping (which will apparently air in fall of 2019) included sets by Isakov along with country rock institution The Nitty Gritty Dirt Band and a more mainstream country outfit called Brothers Osborne. That last act didn’t sound very “bluegrass” or very “underground” to me, but it seems like most of the crowd was actually there for Brothers Osborne.

We arrived early to give ourselves time to explore the venue before the first taping began, but we were surprised to find there was already a sizable crowd tailgating in The Caverns’ parking lot. Next time, we’ll know to bring camp chairs and a cooler! After picking up our will call tickets at The Caverns’ barn HQ, we walked a short distance to the mouth of the cave, which felt very much like descending into Mammoth Cave’s Historical Entrance (complete with temperature drop). I’m not sure what I was expecting, but the cave truly was a fully functioning concert venue with concessions, modern bathrooms, merchandise tables and other amenities that you don’t normally associate with … y’know … a cave. It was all a bit surreal.

We found our seats and soon enough a production manager was on stage to explain how the taping would proceed. Videographers spent several minutes shooting audience “reaction shots” as we clapped and laughed on command. Once that footage was in the can, the performances began. The Nitty Gritty Dirt Band was up first with a great set of originals and covers, including Hank Williams’ “Honky Tonkin” and a fine take on Bob Dylans’ “You Ain’t Goin’ Nowhere.”

Up next was Gregory Alan Isakov, a Colorado-based singer-songwriter who I’ve admired for some time but never before seen live. Isakov has been making excellent records for a long time, and his 2016 live concert LP with the Colorado Symphony is a particular favorite of mine. Isakov’s music helped soundtrack my last two summers in Colorado, including my time at Great Sand Dunes National Park, so it was only fitting that his recent music video for the song “San Luis” centered on that stunning area.

Isakov and his five-piece band played an impeccable set for Bluegrass Underground, with the natural acoustics of the Caverns only enhancing the cinematic sound of songs like “Big Black Car,” “Chemicals” and – appropriately enough – “Caves.” Due to some sort of technical difficulty on the part of the PBS production team, we were treated to two complete renditions of “Time Will Tell,” with the entire band gathered around a single microphone for an absolute highlight of the set.

The head quarters for The Caverns. Photo by Curt Whitacre. 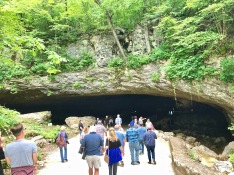 The entrance to The Caverns. Photo by Curt Whitacre. 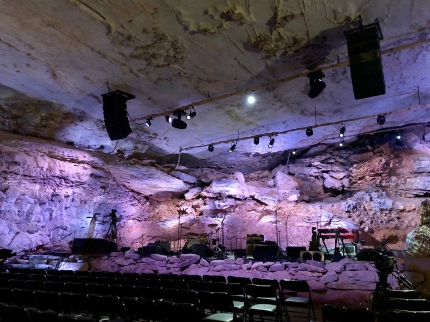 The stage setup in The Caverns, home to the Bluegrass Underground. Photo by Curt Whitacre. 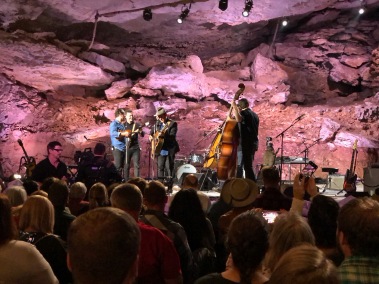 Gregory Alan Isakov and band performing for ‘Bluegrass Underground’ on May 19, 2019. Photo by Curt Whitacre. 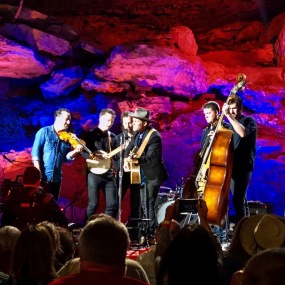 Gregory Alan Isakov and band performing for ‘Bluegrass Underground’ on May 19, 2019. Photo by Curt Whitacre.

Of course, the to-be-broadcast format of this concert meant that Isakov had to stick to TV-friendly lyrics, meaning the brilliant “Saint Valentine” was unfortunately left off of the set list. Here’s a spry rendition from 2014’s Pickathon Music Festival, which was actually my introduction to Isakov:

The morning after the concert, my wife and I made our way from southern Tennessee to eastern Kentucky to spend a few days camping at Red River Gorge in the Daniel Boone National Forest. While I’ve been making sporadic trips to RRG and Natural Bridge State Resort Park for nearly 20 years, this was only my wife’s second visit to the area. After setting up our tent at the Whittleton Campground, we made the most of our two and a half days in the park: hiking portions of the Sheltowee Trace Trail, exploring the trails around Natural Bridge and making frequent stops to the newly-renovated Miguel’s Pizza. 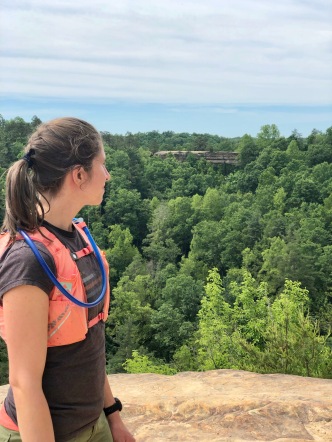 Rebekah with Natural Bridge in the distance. Photo by Curt Whitacre. 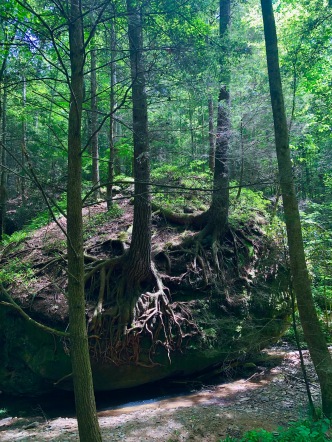 Hiking along the Sheltowee Trace Trail to the Whittleton Arch in Daniel Boone National Forest. Photo by Curt Whitacre. 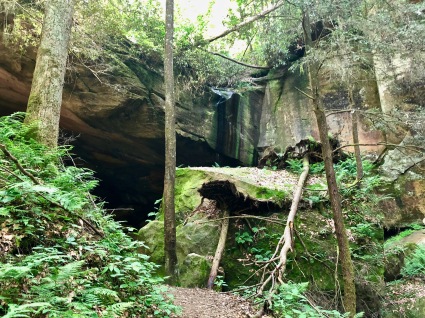 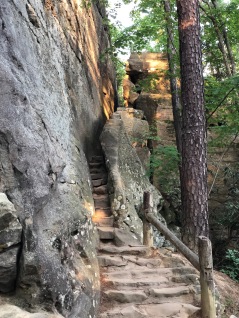 The staircase to the top of Natural Bridge. Photo by Curt Whitacre. 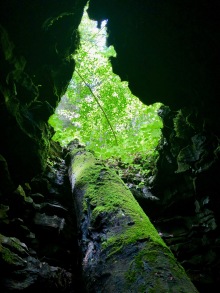 Beneath Henson’s Arch near the Whittleton Campground in Red River Gorge. Photo by Curt Whitacre. 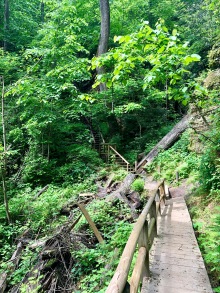 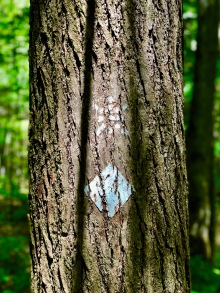 Hiking along the Sheltowee Trace Trail to the Whittleton Arch in Daniel Boone National Forest. Photo by Curt Whitacre.

At the bottom of Devil’s Gulch at Natural Bridge State Resort Park. Photo by Rebekah Whitacre.

We got back home just in time for me to celebrate my 40th birthday. Without a doubt, it was the perfect way to cap off my 30’s and set the tone for all of the adventures to come this summer.